I hope this update finds you in good health and coping with all that is going on around us.

As we get to grips with the potential timescale of what is happening, questions continue over how the season will be finished and what impact this will have on our promotion push. We have been in dialogue with the club throughout the lockdown and while health, safety and livelihoods will always come first, we have also been speaking about the way the club are dealing with the EFL over how the season ends.

Firstly it would appear that there is very little chance of any more football being played in front of fans in this 2019-20 season. Although many of us feel that football is nothing without its supporters, there is a collective will in League 1 to resolve the season, which has given us so much already, with remaining games being played without spectators. We understand that only one club in League 1 favours voiding the season and having no promotion or relegation, so we can also assume that option is highly unlikely.*

As it stands, it seems that a Points Per Game (or PPG) system will be put in place and that will either be weighted towards home and away games played or unweighted and purely based on games played and points earned. The weighted method sees us finish third and unweighted has us fourth. While this may have important consequences later down the line it seems likely that the EFL will attempt to run play offs, possibly with just one game semis at neutral venues. If that does go ahead then many will feel that coming fourth and avoiding Fleetwood might not be the worst thing in world! Given that there could be as few as three games to sort out in the play offs, it seems that may be the most likely outcome and perhaps the fairest in very difficult circumstances.

The problem with this comes if the playoff games are not able to be played for some reason. While this would appear unlikely, it may mean that the league would need to decide on a contingency PPG method to resolve the third promotion place. In the strictest terms if the season is declared at an end without another game being played, then the teams should finish in the positions they are in now, no matter how many games they played. This of course is open to debate and vote but is the EFL ruling as it stands.

While no method that sees promotion games played out without fans or decided by PPG is right, it’s important to remember what we are living through and the impact that it has had on all aspects of our lives. Perhaps what is being suggested is the lesser of the evils we have to choose from.

From an OxVox perspective it was important initially that the club stepped up to help lead the community effort, which it has done magnificently. To me the club feels connected to supporters at a time when we need that most. As this continues, we also felt it was important that the club were fighting our corner with League 1 officials.  Sadly from our point of view the EFL has shown little leadership when it comes to sorting this situation out. By letting clubs take the lead and allowing the three leagues within the EFL to act separately we feel they have let the decision become a fight for self-interest.

While it is vital that the integrity of the club is upheld and it was pleasing to see Karl explaining that the club wants to push on, play the games and get us promoted the right way, it was also important to us that the club was fighting hard for us with the EFL and making sure we get what we deserve from what has been a magnificent season on the pitch so far. Having spoken at length to Niall McWilliams on that subject it is reassuring to know that the club continue to conduct themselves in the right way and that Niall and the team are fighting as hard as any for our club and they make no apologies for that.

It seems we will know more by the end of this week and from there can comment further, but it can only be hoped that the EFL start to take some strong leadership calls on this matter. What we do know is that this pandemic, as well as the far more important hardships it has inflicted on people all over the world, has been incredibly hard on lower league football clubs. We have been steered this season into a more manageable financial situation, but we are still, like many others, in a very tricky position.

The time will come soon when the club ask us to step forward to buy season tickets, shirts and merchandise. Many of us are worse off financially than in many a season before this, and yet it feels to me like fans are ready to step up for our club. It feels like we want to help. Speaking personally, I am not looking at what games I might have missed last season or what I may miss in the early games of next, I just want my season ticket renewed and to know that one day soon I’ll be sitting in the sunshine and watching them play again. I know I am lucky and that some will really be feeling the strain this terrible virus has put on us, but I think those that can, will step up. When the opportunity comes, let’s see a great response from our Yellows community. Not because we have to, or because we are sold with fancy marketing, but because now more than ever it’s our club, and we need it as much as it needs us right now.

Thank you for reading, stay safe and well and as always COYY !

* While finalising this update, the EFL released a statement today which says that League 1 clubs will require a 51% vote to curtail the season and move to playoffs. For the EFL statement see https://www.efl.com/news/2020/may/efl-statement-coronavirus-update2/ 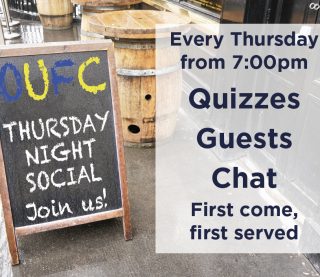 Ahead of this weekend’s derby, OUFC legend James Constable joins us on this week’s Thursday Night Social to discuss all things Swindon, from Di Canio to Town End...