Congratulations to life member Paul Timms who is the winner of the season ticket kindly donated by Manor Flooring. The draw took place last Wednesday, 24th April, at Manor Flooring when the winning ticket was drawn by former U’s striker Steve Basham (see video of OxVox Chairman Paul Peros and Steve below):

Our thanks to Steve for his time, and of course many thanks to Dan Burgess and Manor Flooring for their support. 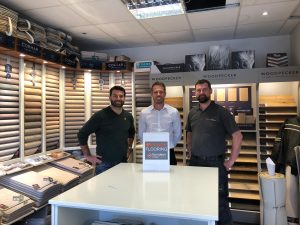 We have contacted Paul who is currently in Northern Ireland and is only able to get to occasional games. He has  very kindly donated his ticket to the Community Trust, as he is keen for the ticket to get used regularly. We will be making the necessary arrangements with the Community Trust and we hope to catch up with Paul when he is next over for a U’s game.

If you brought a flag or banner for display at the playoffs, please come to the stadium between 5 pm and 7 pm on Monday to collect it. Ali and Simon...